Meet The Fastest Car In The World In 2016 By Hennessey 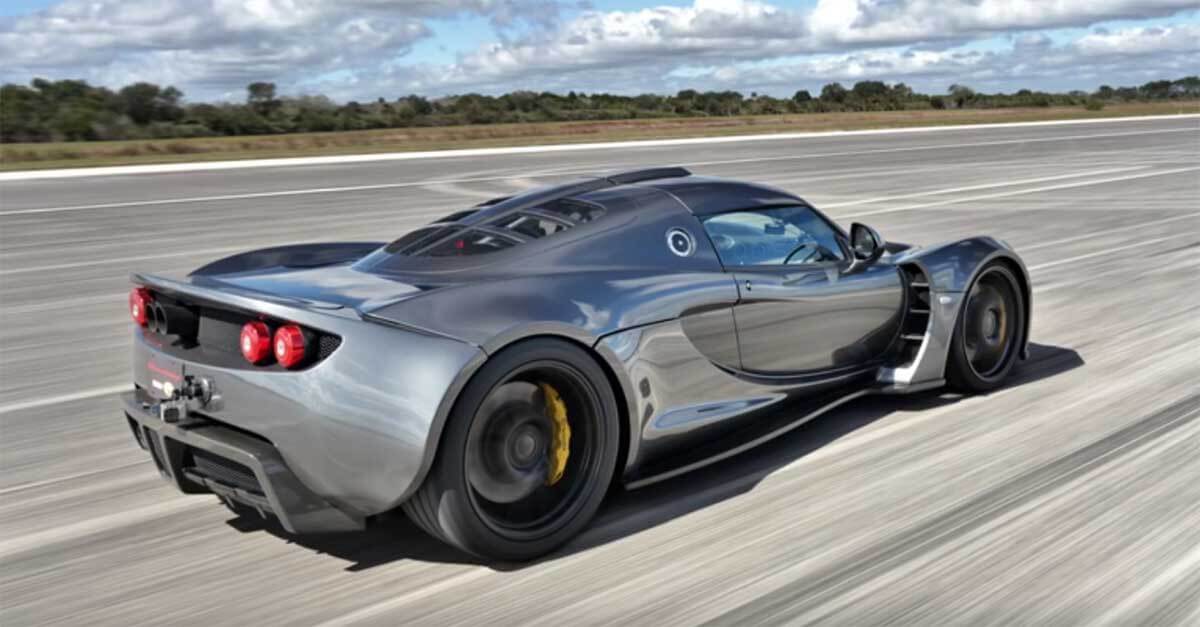 At a price tag of just under $1.5 million, you too can get behind the wheel of one of the world’s fastest cars – the Hennessey Venom GT. Clocked at a staggering 270 mph, this custom design from Hennessey Performance currently holds the world record for car land speed. Because only 16 have been sold to date, Hennessey Performance missed the added distinction of fastest car in production in the Guinness Book of World Records.

But before we leave our jaws agape, let’s take a quick look under the hood. Powering this distinct Hennessey design is a scorching hot 7.0 L LSX Twin Turbocharged V8. This engine can rev up to 7,200 rpm and has three distinct engine outputs, the greatest having a max output of 1,200 bhp. The transmission was ripped directly from the Ford GT from which it got its title – and a fitting choice as well. The Ricardo 6-speed manual transmission is the perfect choice to control gear ratio performance of this blistering fast engine.

In order to break world speed records for cars, the Hennessey Venom GT had to design its own state-of-the-art carbon fiber frame to reduce weight and severely decrease air friction drag. The “World’s Fastest Edition” model which came out in 2014 featured this acclaimed racing coupe feature when they went on sale for a cool $1.25 million each. You’ll need your own pit crew to maintain it but at that price, we’re guessing the three people who snatched them up already have their own.

Hennessey didn’t design a mass production line of sport cars so that everyone on the block could have one. Hennessey engineers designed the perfect, streamlined car that absolu

Taking A Look At The Upcoming Venom F5

Hennessey didn’t design a mass production line of sport cars so that everyone on the block could have one. Hennessey engineers designed the perfect, streamlined car that absolutely scorches records and looks so hot, it’ll melt the pavement beneath it. That said, with only sixteen of the previous models having been sold, Hennessey is obviously looking to shake things up again with an announced upcoming release of their coveted and highly sought after Venom F5.

Top Gear was the first to take a serious look at the proposed Venom F5 when they eagerly waited in line to get on the list of entertainment shows to take a crack at it. According to John Hennessey, the boss from which the name comes from, he estimates something in the vicinity of 290 mph will be possible with this upcoming car. This is all the more important because since Hennessey raced to the head of the pack in 2013, other manufacturers and design firms like Bugatti and Veyron have taken significant chunks out of their lead. The Veyron Super Sport has clocked in at 268 mph with proposed production of a model that will surpass even that. Hennessey has to be on its top game if it wants to stay as the coveted leader of the pack.

To get up to this new blistering proposed record of 290 mph, Hennessey is going to have to go back to the drawing board. According to their press release to Top Gear, they’ve taken significant strides in enhancing and upgrading their carbon fiber frame. Getting away from alloyed frames has allowed these racing vehicles to approach new speeds with lower curb weights. The new Venom F5 is suspected to weigh in somewhere around the ballpark of 2,700 lbs. And, apparently, they’re not taking a backseat on engine power either. While official figures are still forthcoming, there are strong hints the new Venom F5 should top out at 1,400 bhp power output. That’s going to literally throw the competition into the dust. At present, the Hennessey Venom F5 is expected to blow the competition out of the water and make significant strides in previous Venom GT versions. It’s likely to turn heads at racetracks as much as highways as the people who can afford these new models will either be loaded or own their own race team. The production value is estimated to be $1.2 million before taxes but actual price will likely vary greatly. It’s supposed to come out some time later this year – so that leaves us looking forward to seeing even more of Hennessey Design in action. The first course the new Hennessey Venom F5 is scheduled to run will be the Bonneville flats. This is likely due to the slippery salt surface which is expected to reduce the friction co-efficient of the tires so they can break their previous world records. If they do, the Venom F5 will quickly out pace the Venom GT in terms of prestige. This is great because the only way I’ll ever afford to drive one of these is if I find an old one in a junkyard. You might also like this list of the fastest military jets on earth.