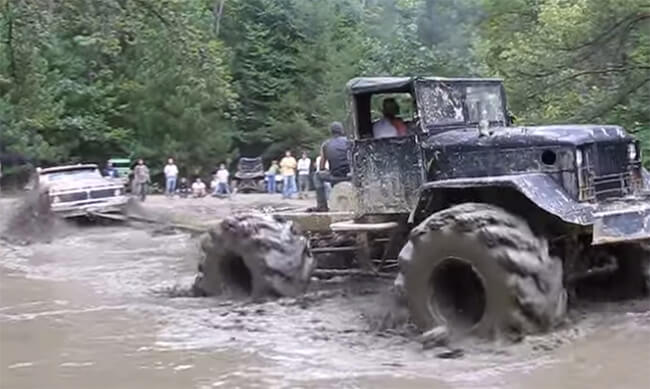 A lot of times when the military gets rid of old trucks, it’s mostly because something new and shiny is getting phased in. However, a lot of really good hardware gets left out to bake in the hot sun. That’s until some enterprising mechanic sees the true potential in a 5 ton truck – and it sure pays off for that old Chevy truck getting hauled out of the bog. And that’s exactly what those old 5 ton trucks were designed to do! Long before the days of the Oshkosh 2 1/2 ton truck hit the motor pool, General Motors produced a 5 ton truck with plenty of horsepower and torque to spare. These old refurbished vehicles have turned into the civilian equivalent of extreme truck recovery. This shows off a 5 ton doing what it’s meant to do – haul smaller trucks out of the thick of it.

International Harvester got its name, originally, for producing some rather hearty agricultural trucks, harvesters, combines, and other heavy duty equipment. During the mid-50s, though, they began to get into military contracting for the M54 5 ton truck. This beast was used in all the branches of service. Outfitted with a Continental engine, it was designed specifically for off-road. It was one of the first 6 x 6 trucks to see service. With articulated differentials and a hearty gasoline engine, this beast was capable of five speeds and two ranges – two wheel drive and six. However, its gasoline engine significantly reduced its effective range of less than 300 miles and with a 78 gallon tank, a driver could spend an entire paycheck keeping it fueled.

Many of these aged beasts still pack the original 20,000 lb winch cable to the front. Intended, at least initially, for self-recovery operations, plenty of civilian owners have found plenty use in pulling 8,000 lb pick-up trucks from deep sand and swamp. It can also be quite handy when stuck on a soft river bed – as this one driver fails to do (probably because he doesn’t know).

In 1982, it eventually got phased out in favor of the more robust M939. The remainder of M54s were used by reserve and national guard untils until very recently. Now, they can g

Considerations When Hunting for the M54

In 1982, it eventually got phased out in favor of the more robust M939. The remainder of M54s were used by reserve and national guard untils until very recently. Now, they can generally be purchased through the Defense Logistics Agency Disposition Services’ Defense Reutilization and Marketing Office (DRMO). They can be purchased for quite a discount and outfitted for more modern uses – like pulling friends’ trucks out of the swamp or fording rivers.

While the Continental R6602 gasoline engine that came with it wasn’t exactly a rearing sports engine at around 224 hp, it did eventually get upgraded to the Mack ENDT-673 turbocharged diesel engine which packed less horsepower but considerably more torque. When shopping, if it says its a diesel engine – it means you probably found a Mack ENDT-673 turbocharger. That’s a great thing for range and towing, but it’s definitely more difficult to find spare parts for if the turbocharger goes bad.
Read Less
PREVIOUSNEXT Suggested Stories