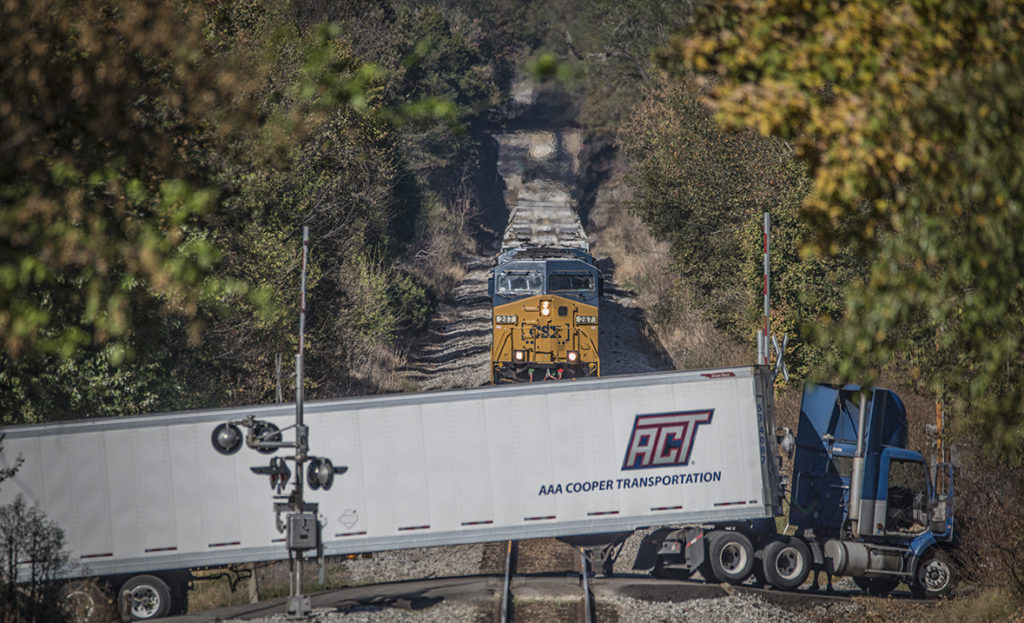 Fire Truck in a Sinkhole

Being a first responder or working in a place like – The Fire Department – means that a lot of people rely on you. You are a necessary figure in the community.

But…that also means that people think you should never make a mistake. And that’s dangerous territory because as you can see here…emergency personnel can make mistakes just like anyone else. 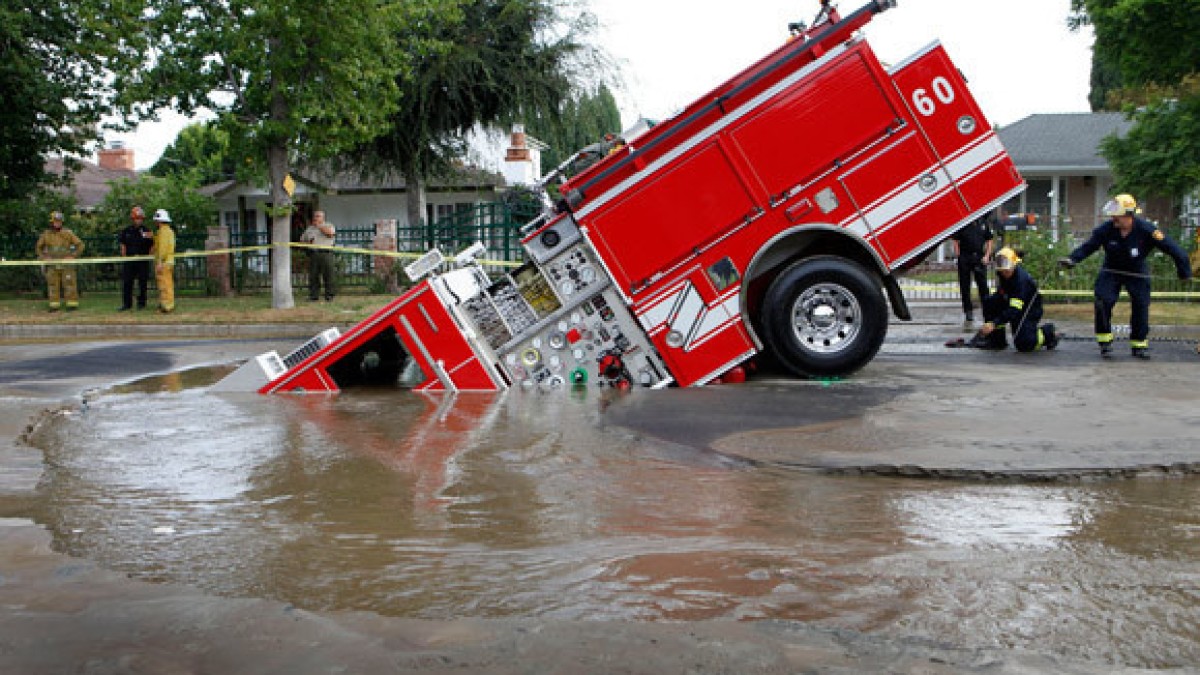 And who knows how deep they go! Thankfully, that emergency dispatch vehicle was wide enough to avoid being swallowed outright. What’s going to be real funny is seeing how they fill that patch in later. 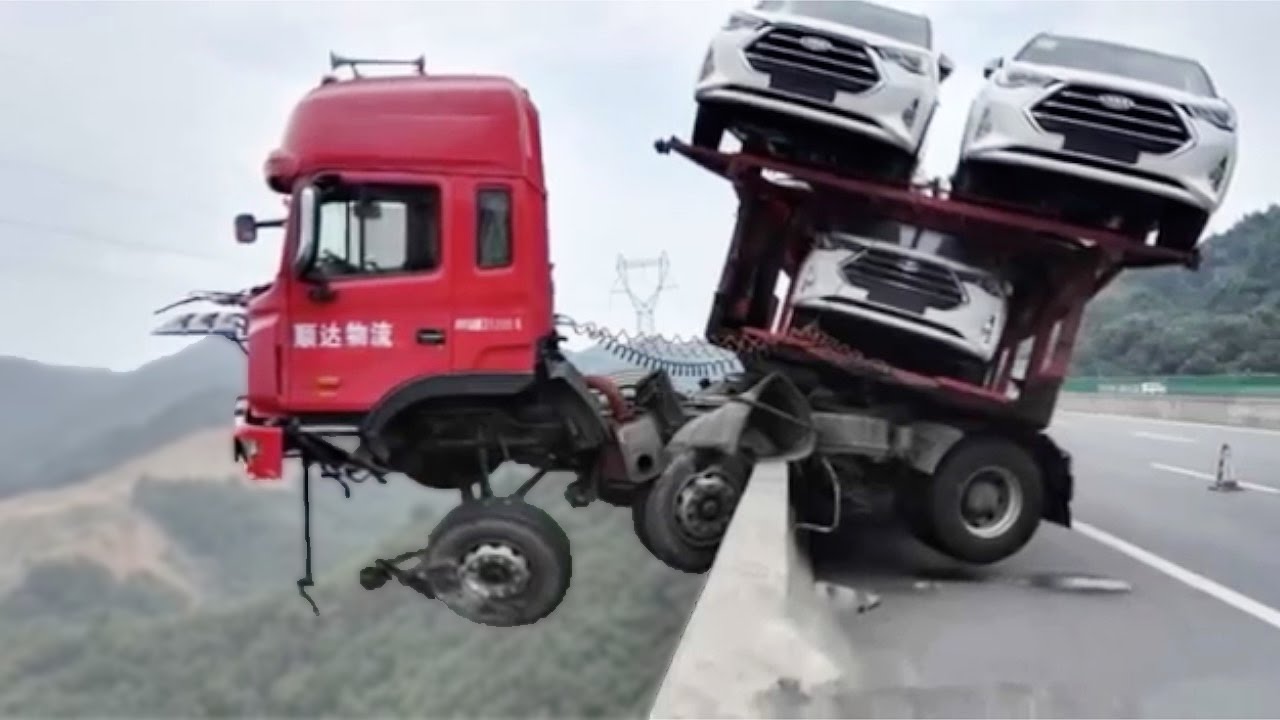 This dealership hauler was traveling down a three lane highway in the northern regions China when an abrupt stop in front of it forced the driver to veer right….right into the wall that separated the vehicles from a complete free fall into the river below. We only with we could’ve seen the driver get out. He must have been scared to death! 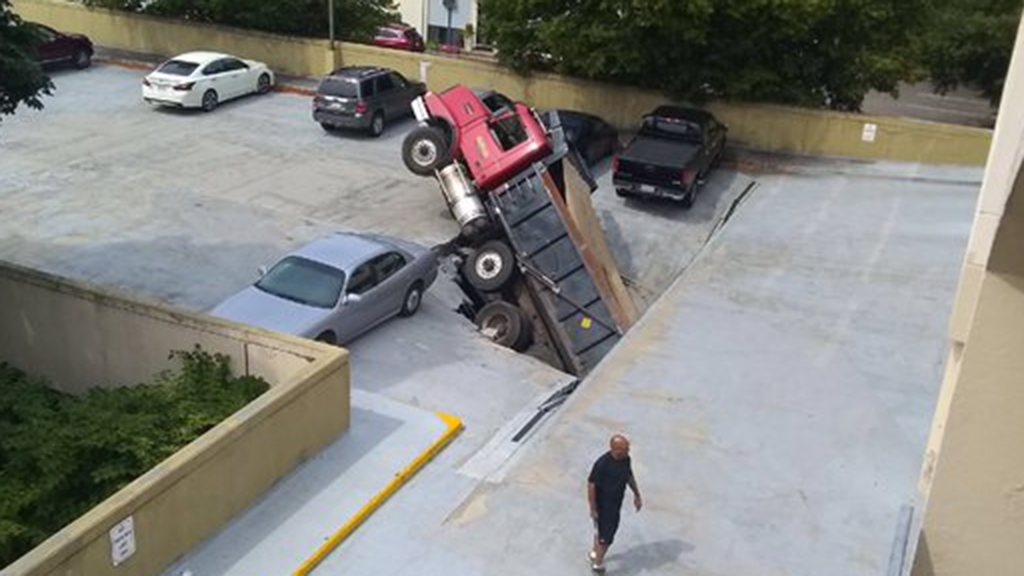 Either that dump truck was waaayyy over limit, or that parking garage company is getting sued – big time. It caved in! How horrifying for anyone below on the next level…

This happened in Quincy, Massachusetts. No one was hurt. The driver said he was following GPS directions and thought the parking structure was a through-way or else he wouldn’t have entered the structure. Tough break. 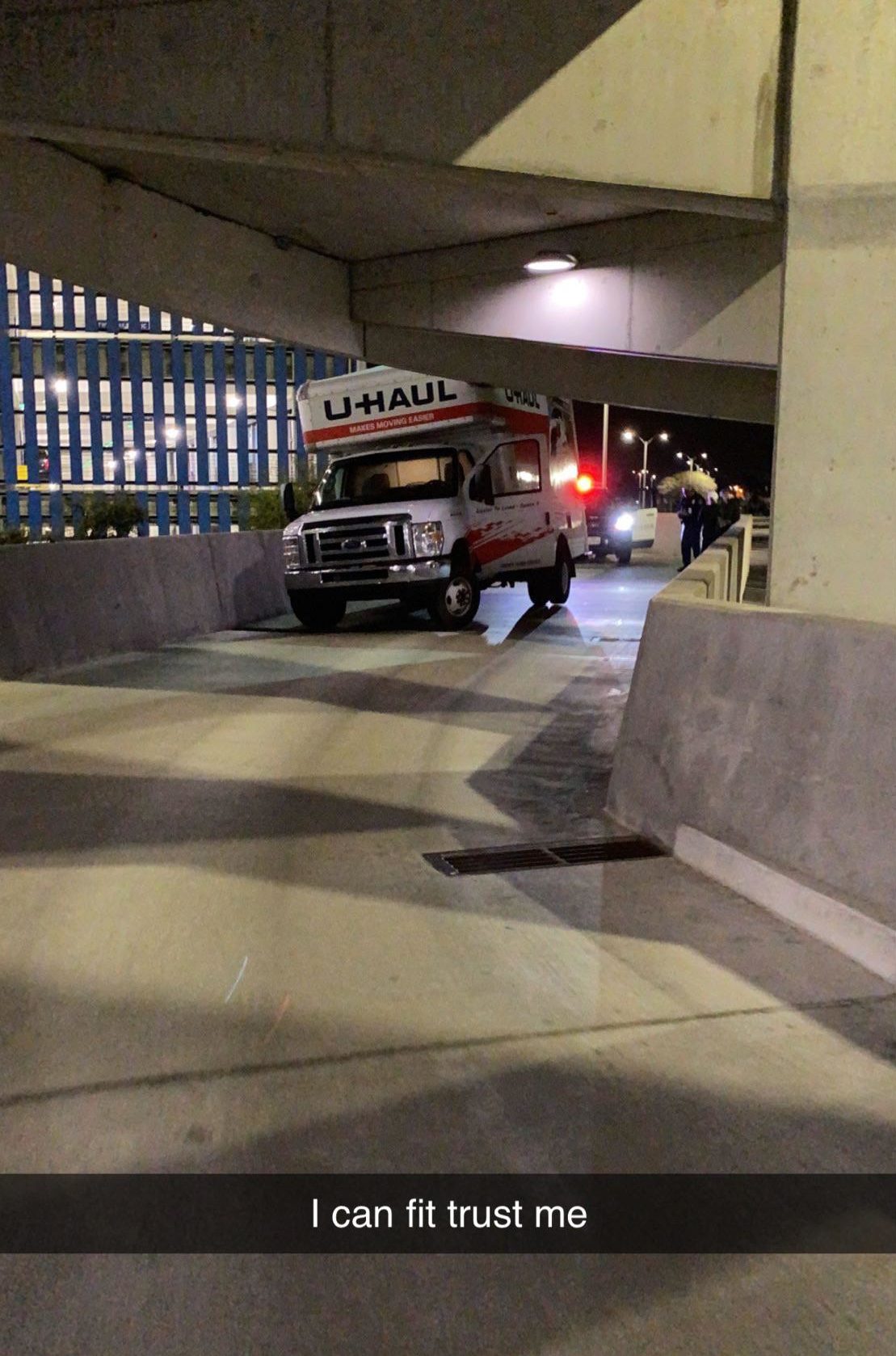 That sign is posted for a reason. Hopefully this U-Haul truck driver checked off on getting insurance.

When they advertise “Mom’s Attic” on the 12 ft box trucks, we’re all certain U-Haul didn’t mean it was the crunch zone before a driver realizes he’s in too deep. This guy better call his boss and let him know he’s going to be late. No fast moves are happening today. 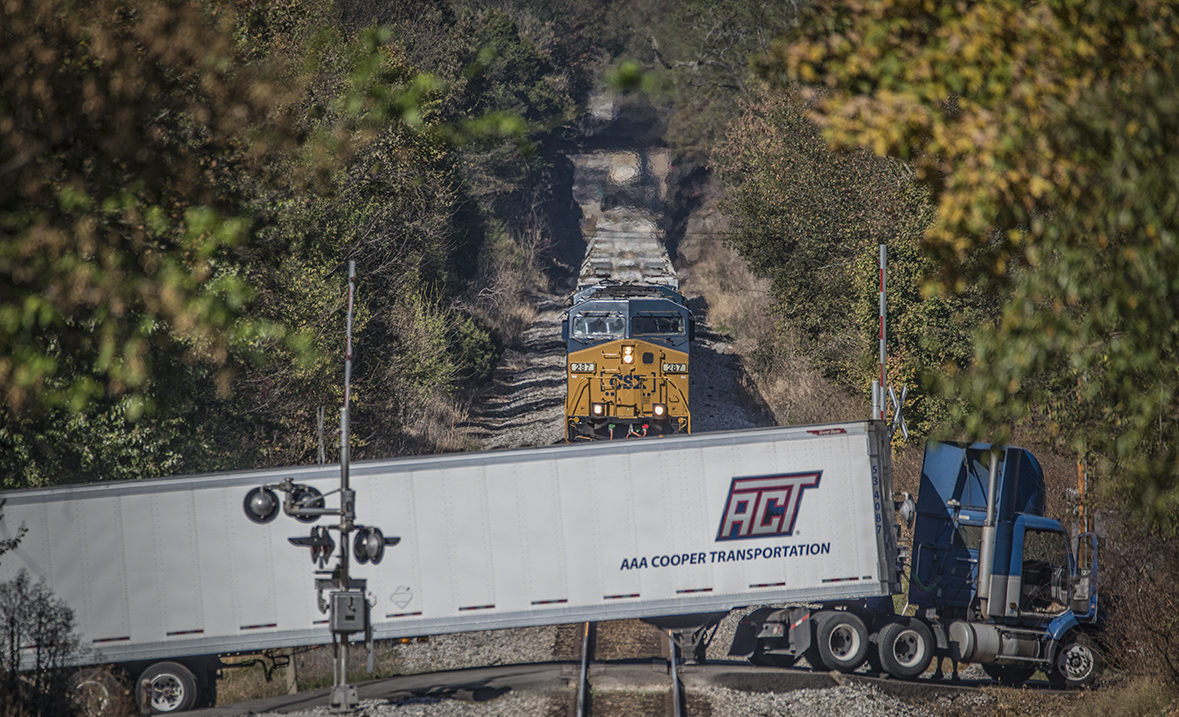 Up over the hill we go! That great moment when a truck driver realizes that not only did he make a huge mistake – he made that huge mistake stuck on train tracks.

Thankfully, this CSX train was able to pull the emergency brakes and come to complete stop just yards away from the semi truck. Phew! If you’re wondering what happens when a train actually hits a semi….click on. 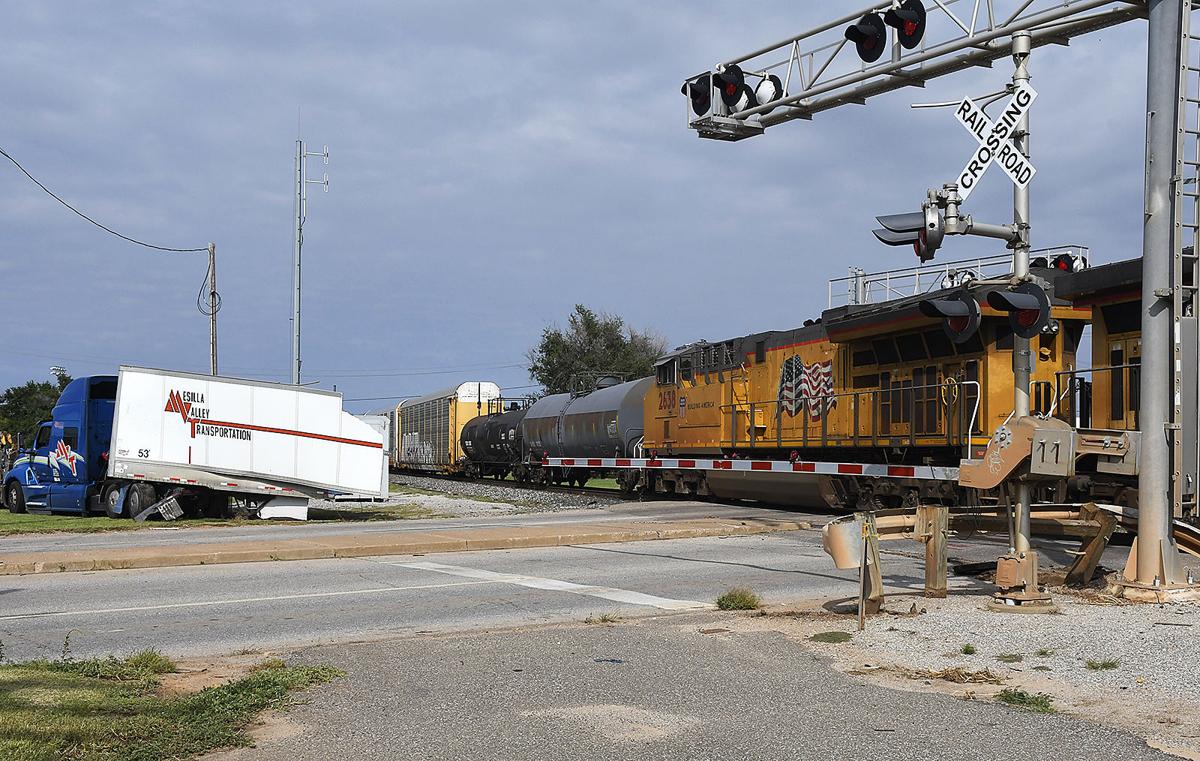 Everyone is safe! That’s the good news. Bad news: driver is probably fired and someone’s gonna have to pay for that trailer! This train was unable to brake as it came around a bend and didn’t see the truck stopped on the tracks in time.

Ever seen a semi truck get stuck under and overpass? Well, you’re about to.

Semi Truck Runs Into a Bridge 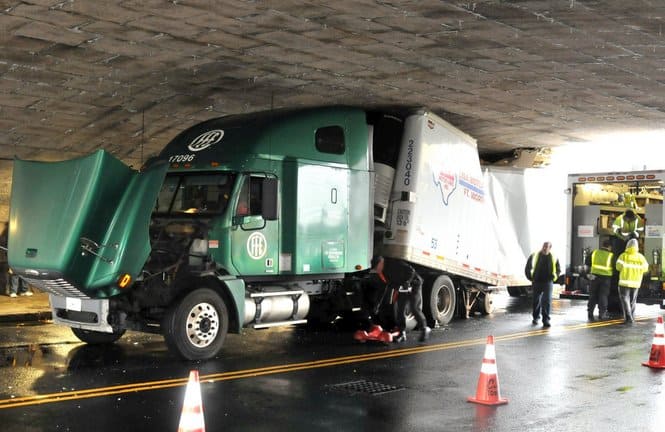 Nothing like thinking you’re making some great time on a long distance haul when you forget to see the low clearance sign below a bridge.

This truck driver is sure going to be waiting awhile until he gets to his next destination. The good news is the cab is still perfectly fine. The bad news is that the traffic behind this truck ain’t going anywhere soon.

This Semi-Truck Trailer in The Ditch 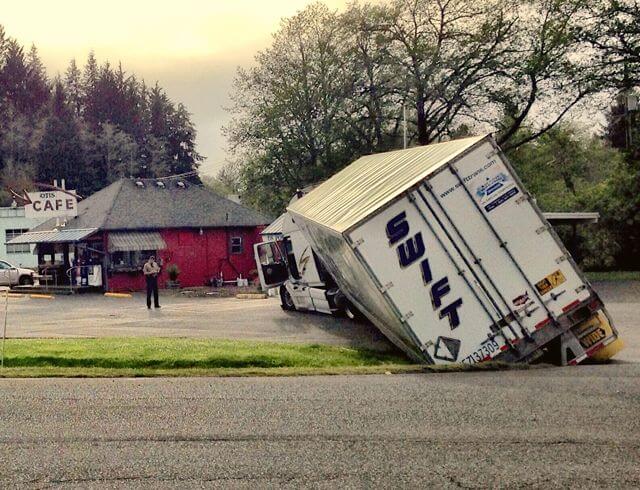 Just over the horizon, every long distance driver hopes for that scenic diner overlooking the mountains.

Unfortunately, in the early morning hours when this truck took a turn to get some breakfast, he may have turned a bit too early. Well, hopefully he had plenty of time to enjoy that breakfast while he was waiting for a wrecker to get there. 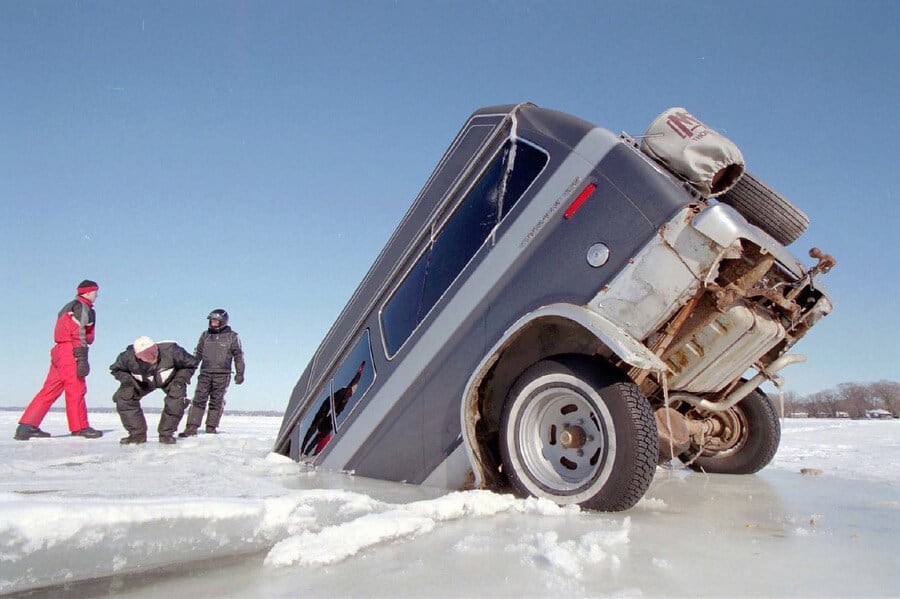 This truck is about to turn into a submarine. That’s the unfortune lesson these gentlemen had to learn the hard way when they took their van out onto the “mostly frozen” lake.

Mostly being the key word. It’s gonna be awhile before that van is out and moving about again. Perhaps in the mean time, they went back to fishing? 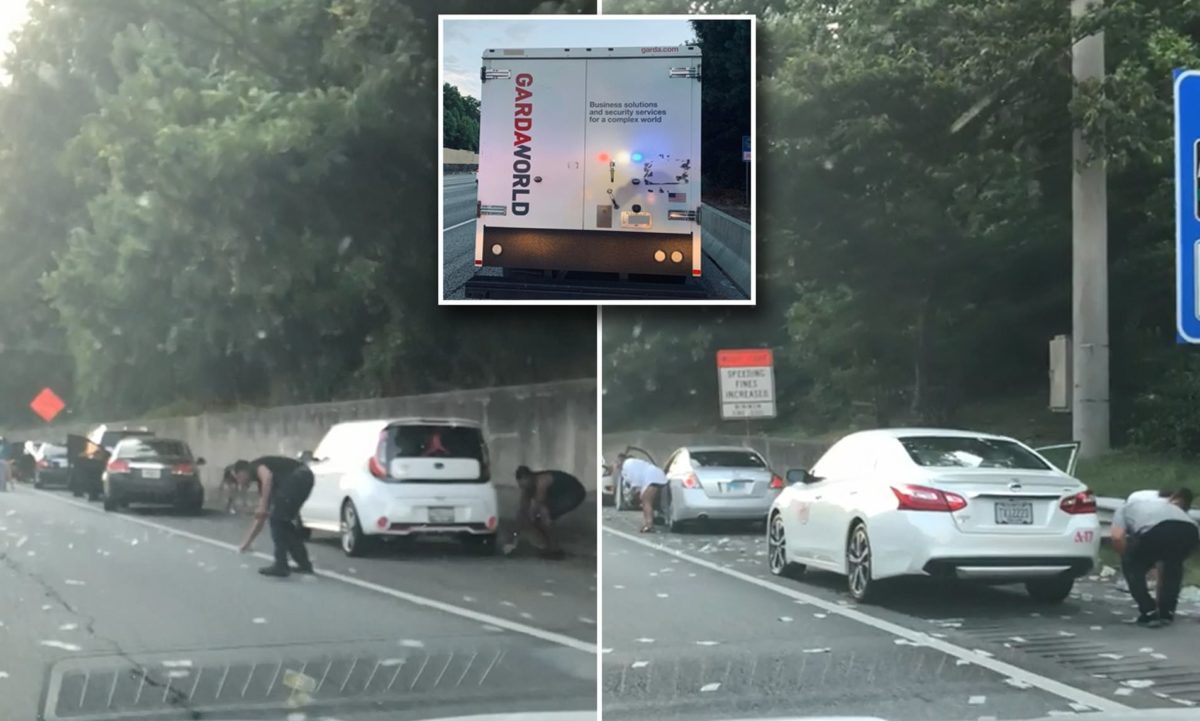 Money sure doesn’t grow on trees but if you were on I-285 in Atlanta on July 10, 2019, it was raining down on you from the inside of an armored truck. Thousands of dollars, just flapping in the wind on the busiest highway in the state.

What do you do in that situation? Pass by and be amazed and talk about it for the ride home…or get out and grab some cash!? We sure know where we would be…. 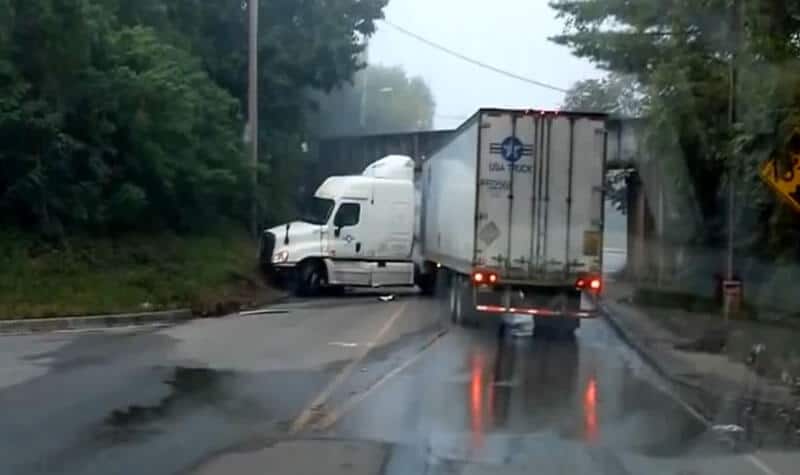 Turn back before it’s too late! Oh wait a minute – it is! While this truck driver avoided the senseless fate of taking off the top end of his cab, he surely has gotten himself stuck in an even sillier predicament: jack-knifed under said bridge. While it’s great he stopped – unfortunately the effect is the same for the other drivers. That bridge is effectively closed for awhile. 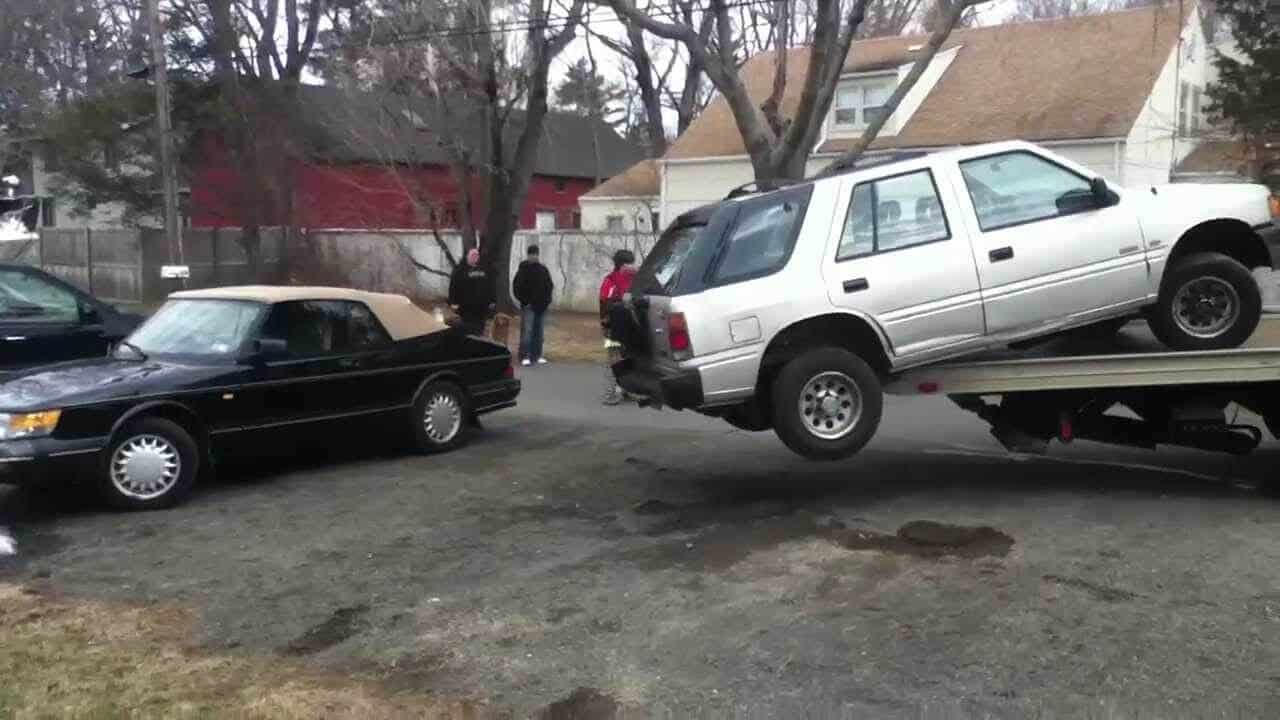 He said his e-brake was on, right? That pit forming when an owner watches his broken down truck get lifted onto the back of a tow truck? “Please, don’t let it slide off.” Then the vehicle slides half way off and lodges itself right on the iron precipice of a wrecker. That pit just falls flat in the stomach, don’t it? If the e-brake is a little loose, at least put the truck in gear first. 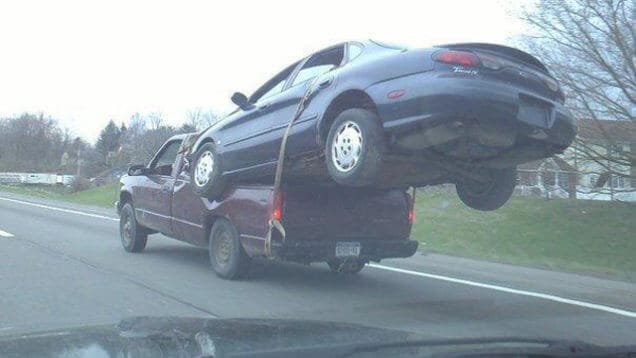 We’re pretty sure that just because a car meets the payload requirement of the truck doesn’t mean it can just be loaded on back.

At least this truck driver is being real safe and using a tow strap. We’d hate to see what happens when he hits the freeway. Oh, wait – he’s on the freeway. Where’s his DOT “Caution! Wide load!” sign?!

Seriously Stuck in The Mud 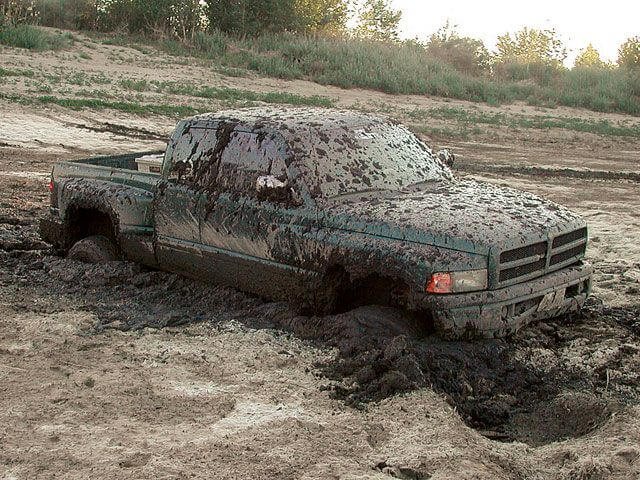 Of course when you get that brand new clean-as-a-whistle pick-up, you’re going to want to do the most natural thing possible: get it dirty.

While a muddy soft field is, in theory, a great way to do this – as it turns out, it’s not such a good idea. That deep, rich, black mud sure looks like it’s eaten a few sets of tires. 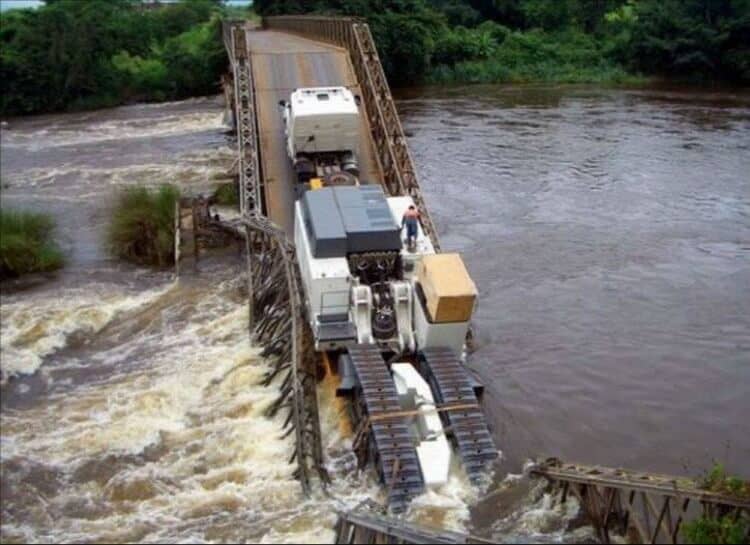 It’s got to be nerve racking to drive a semi-truck with this much weight on it. Then to have to drive it over a bridge, no thank you.

Not after seeing this picture! Clearly, this was too much weight for the bridge to hold and it would have been too much for my underwear. If you’re looking for an image from this list to share, this is a good one. 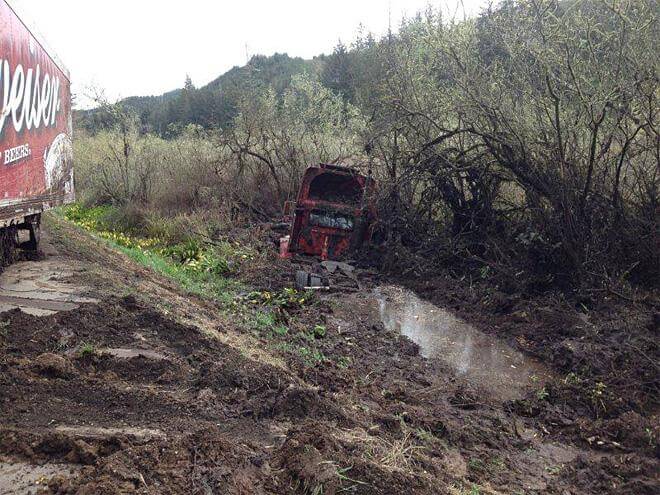 Battleship sunk! This beer run is going to be a bit behind schedule after this cab driver slid off the road and wound up in a big tall trough of mud soup.

For the wrecking crews out there, this ought to be a fun little surprise to show up to. With zero traction and plenty of room to slide off, it’s going to take more than one winch to haul this semi tractor trailer on out. 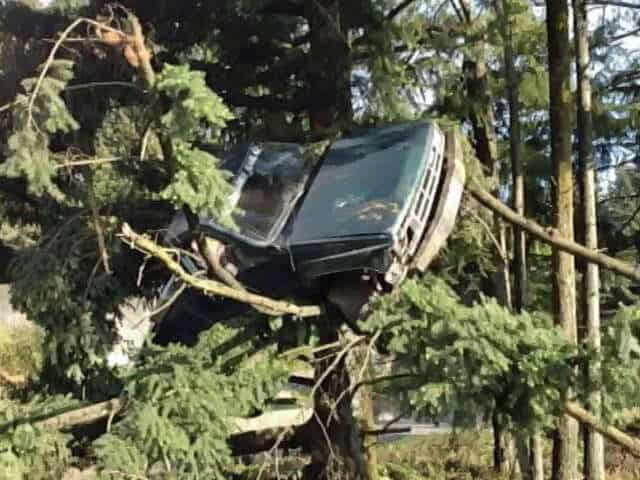 We were promised hover cars, darn it! This guy couldn’t wait, apparently, as he took his truck airborne. Just that one simple matter of trees getting in the way and he could have got it, too! 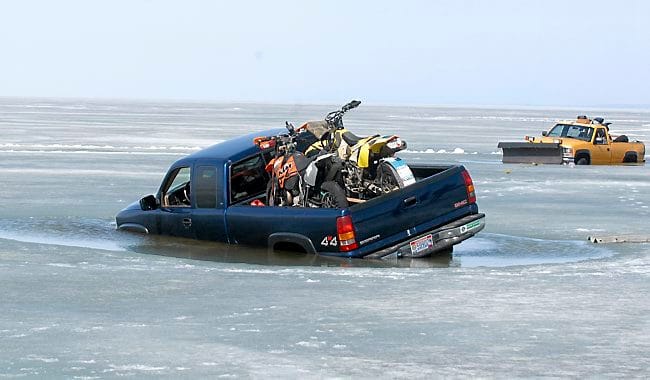 What is that plow truck doing there? Must’ve been an early thaw for these gentlemen as a weekend of playing on the frozen lake suddenly turned serious. Thankfully, it appears both were playing the shallow end of the lake. The bad news is that part of the lake goes on for awhile. It’s going to be a hot minute before anyone can get those trucks out. Or should we hope for a cold minute?

Semi-Truck in a Ditch 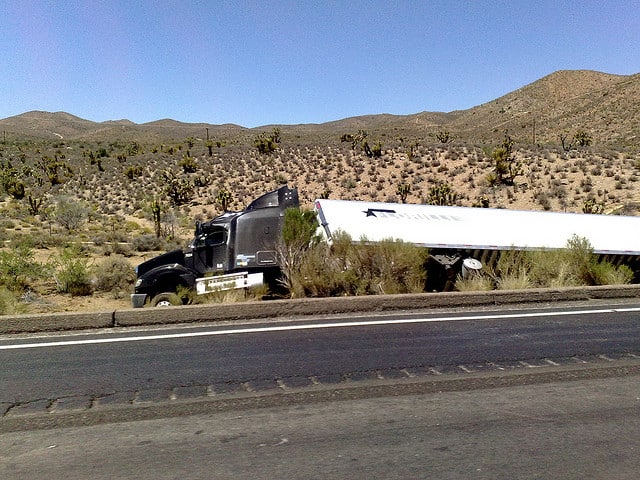 When it’s time to pull off the road – not like that! Whether this driver was just over on his log books and needed to take an immediate break or if he blew a tire and had to make an emergency detour – it’s still going to be a long time before he’s back up and moving again.

Unfortunately, stuck out in the middle of nowhere with a tipped trailer and half the wheels missing is a recipe for disaster. Might as well soak up the scenery – it’s going to be awhile walking to the next gas station. 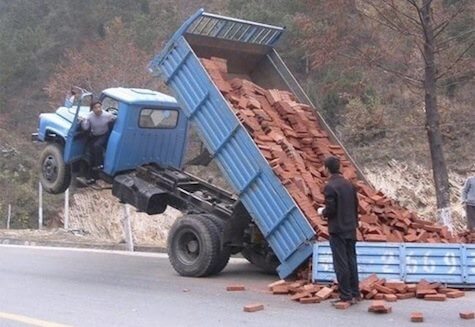 That’s one unexpectedly large shipment of bricks right on your doorstep! There’s that great moment where the driver looks back and realizes there ain’t no easy way out of this.

While the truck certainly was over its limit, it doesn’t make it any worse that he didn’t think about the shifting of weight when they were loading these bricks. Next time he’ll get it right… If he gets a next time. 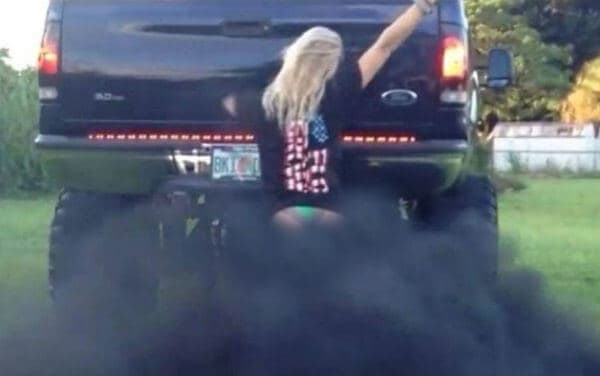 Talk about a smokeshow! This is all kinds of hot but I can’t imagine it’s very healthy.

Standing behind a heavy duty diesel truck while it’s rolling coal like there’s no tomorrow. No thank you. But if this girl wants to do, I’ll happily watch all day. 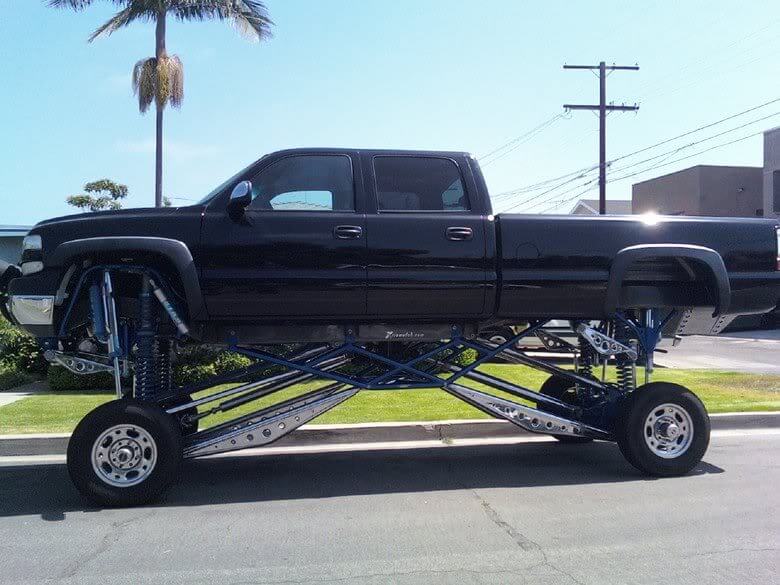 A fool and his money are soon parted. Unfortunately, there’s a few trucks out on the road where the mods done just don’t make sense.

Especially when you’re taking an extended cab, extended bed Chevy Silverado and raising it up in the air six feet only to have it resting on baby trainer wheels? Top heavy to say the least! 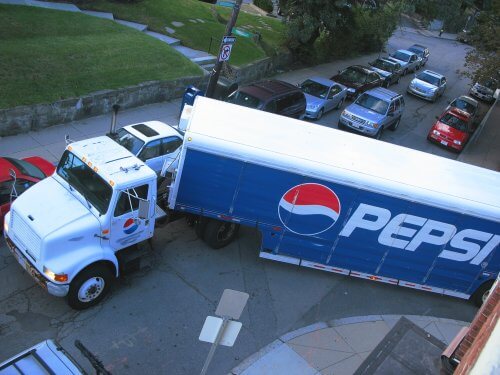 “Hey, I’m drivin’ here!” Another big mistake truck drivers make is being forced into the position of blowing through traffic – like this Pepsi driver surely did.

It’s an unfortunate fact of life. Some runs will take a driver through some narrow streets. Local traffic is just going to have to deal with it. Let’s just hope nobody double parked on the street – this guy is not slowing down. 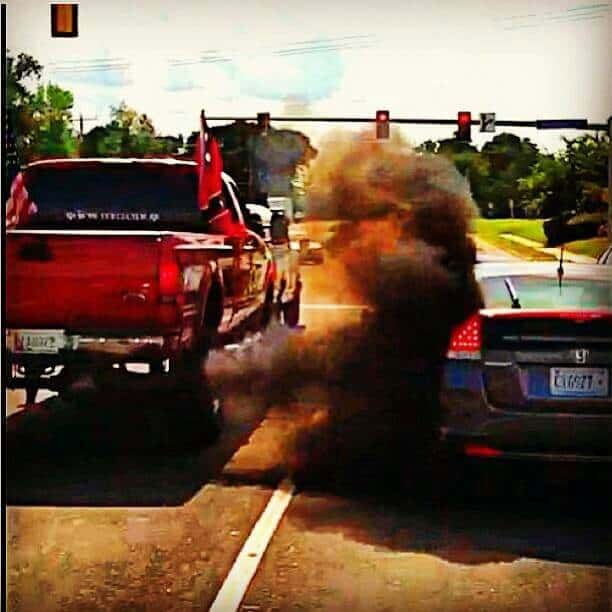 Two polar opposites parked at a red light. What better way to send the message than blowing a steaming roll of thick diesel smoke right into the window of a gas sipping hybrid?

At least the question of whether or not they were going to race once the light turned green is answered. Hopefully, the Prius driver didn’t have his window down. 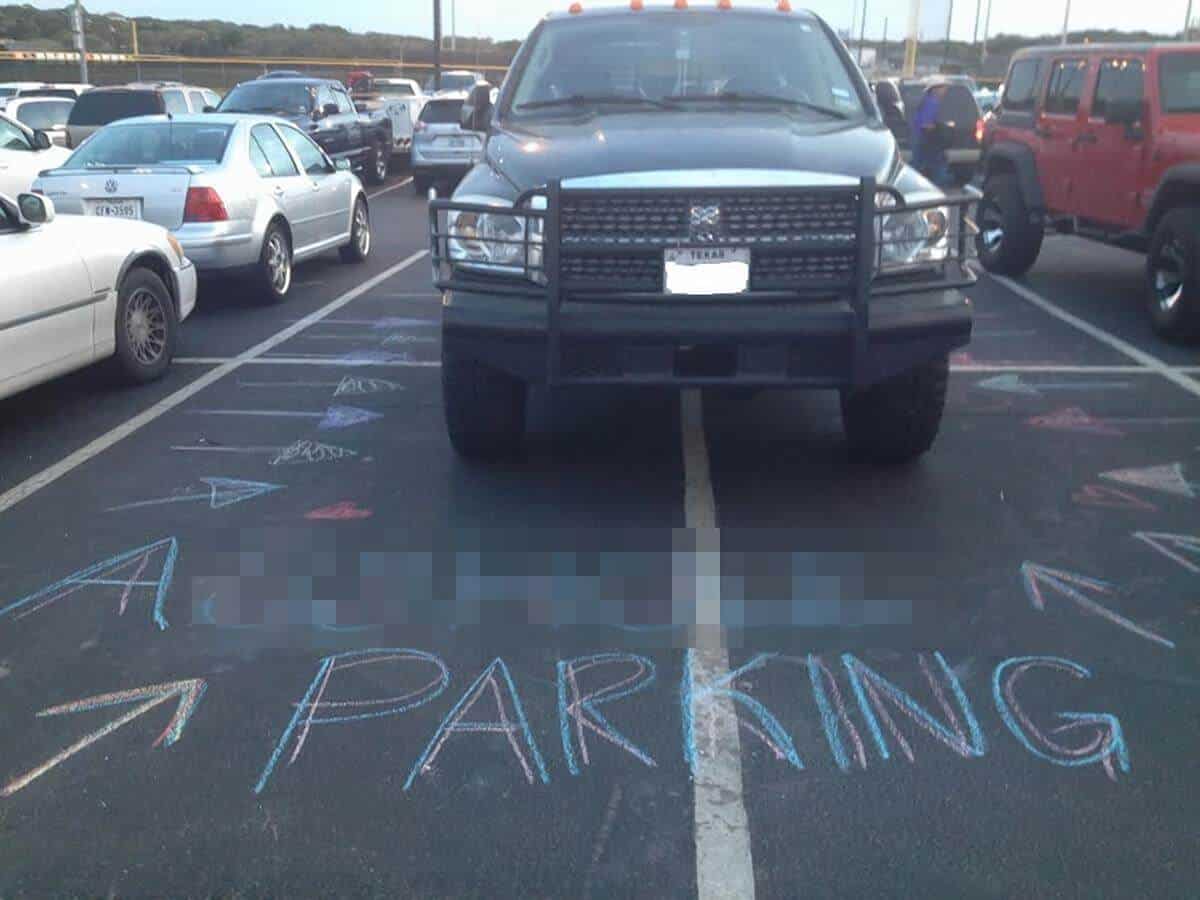 We get it – it’s a nice truck. Taking up four parking spaces, though? This guy must be confused as to what 4×4 means.

Thankfully, some Good Samaritan showed up in the nick of time to leave a colorful chalk message for the driver. Maybe it’s just a bit pointing out the obvious. Will that truck driver changes his habits because of this or is it only inspiration to keep doing what he’s doing?