You Won’t Believe the Engine on This Bike! 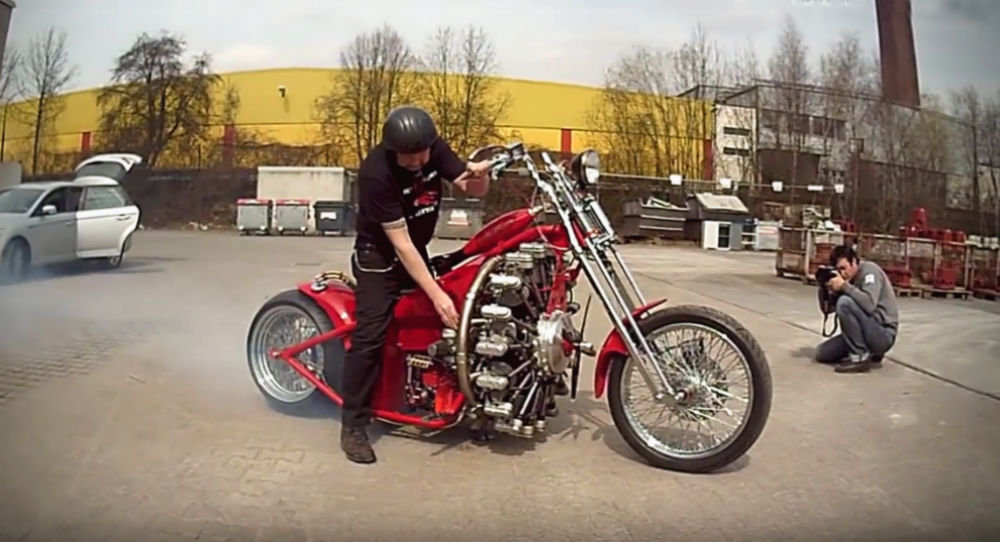 Hey Snoopy, meet the new Red Baron. This may not be the fastest motorcycle you have ever seen by any means, but I bet it is the most awesome. It is a custom-made chopper aptly named the “Red Baron.” The bike was built by a custom German bike shop. By all accounts, they had a blast during the build, as evidenced by the smiles on their faces when it is taken for an inaugural spin. You can tell these guys live for this sort of thing. The fact that it is themed out with the Red Baron is icing on the cake for them. Though this does not show the machine stretched out in full form, it does allow us to get an up close and personal view of all its glory from the perspective of the build team and owner. Let’s unpack what you are actually looking at, shall we?

The Intricacies of the Build

To begin with, look at all of that chrome. Chrome makes anything more appealing, and always makes an engine pop. However, the amount of chrome on this thing would blind you if it were facing the sun. Look up the Archimedes death ray and you will see what I mean. The engine on this bike could serve as a giant death ray laser because of all the chrome bling. Plus, chrome is pretty expensive so you can only imagine what it would cost to outfit an engine like this. It could be so expensive that the owner might charge you just for looking at it! Next, you move around the body and notice the beautiful, custom red paint job. It is so pristine that the Baron himself might shed a tear or two of happiness if he were alive to see it.

The build team is keen on detail, even with the paint. Notice the bomb that rests on the gas tank in full view. Notice the German style detailing on the back fin, as well as the words written in German on the fake bomb. The word at the end of the sentence “Richthofen”, is actually the name of the Red Baron.

See, you learned something today. There’s even a nice little prop spinner mounted on the front of the engine, giving a head nod to his airplane. Finally, we get to the real beau

See, you learned something today. There’s even a nice little prop spinner mounted on the front of the engine, giving a head nod to his airplane. Finally, we get to the real beauty of the machine. All of the horsepower transferred to the wide rear tire and that massive drive belt is created by that impressively large engine. The size of the drive belt speaks speak to the power of that nine cylinder aircraft engine. This one in particular is a Rotec Radial R3600. It generates 150bhp. That is more than enough to get you airborne. If only it had wings!

Then it starts up. I bet if you are there, you can feel the earth tremble just a little. The start certainly paints grins on the faces of the build team. The engine is loud enough to send every forest creature within a five mile radius heading for the hills. I’m sure he will get noticed on the road. Yet, a closer look reveals something odd.

What is Going on With That Engine?

There is some sort of witchery going on with the engine itself. If you see the end of the post, it appears that the owner hops on the bike and prepares to take it for a spin. He inserts the key, flips the switch, and gives it a turn to initiate a start. Yet, it appears that the engine slightly misfires. He pauses for a moment and the builder steps up to the plate. He gives a light tap of the ignition switch and the engine roars to life. Now, misfires are fairly common in engines, particularly aircraft models. However, what is peculiar is the way that this engine roars to life after the misfire. With the flick of a switch, this thing springs into action! Usually, it takes a bit of chugging for an airplane engine to start, due to choke settings and fuel mixture. That is not the case here though. I’m not sure what they did, but whatever it was turns this airplane engine into a world class motorcycle start up machine.

That is pretty impressive. An engine like this will certainly beat the pants off of any sort of Ninja or Hurricane speed bike on the market. Well, it will beat it in regards to performance. However, since those motorcycles are much lighter they might actually move quicker and gain more speed. I’m splitting hairs I know. To settle it, perhaps a race is in order? I’m sure if the subject was raised, the challenge would be accepted. He is the red Baron after all! 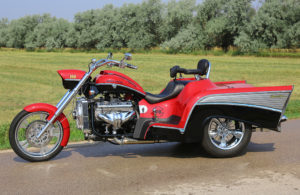